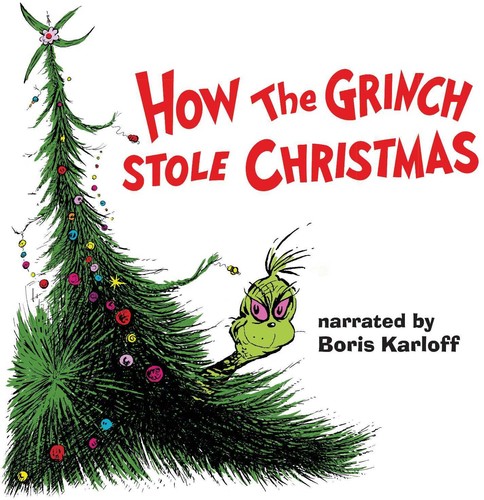 Dr. Seuss' 'How the Grinch Stole Christmas' was a popular children's book during the late '50s and early '60s, but it achieved a new level of acclaim in 1966 when it first appeared as a television special. The soundtrack includes narration by Boris Karloff, and the immortal voice veteran Thurl Ravenscroft singing 'You're a Mean One, Mr. Grinch'. Continuing with its vinyl soundtrack reissue campaign, UMe will be reissuing this classic on Grinch Green vinyl for the first time. 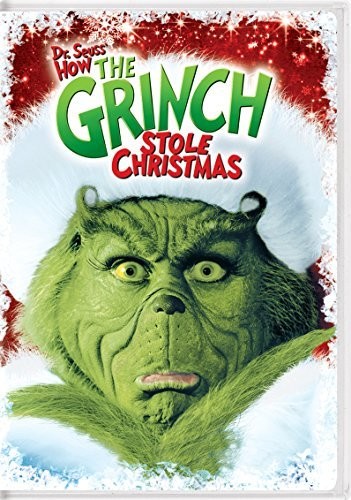 Discover the magic of the Mean One this holiday season! Oscar-winning director Ron Howard and Oscar-winning producer Brian Grazer bring Christmas' best-loved grump to life with the help of the irrepressible Jim Carrey as The Grinch. The Grinch is a celebration of the holiday spirit no home should be without! Why is The Grinch (Carrey) such a grouch? No one seems to know, until little Cindy Lou Who (Taylor Momsen) takes matters into her own hands and turns both Whoville and The Grinch's world upside down, inside out… and funny side up in her search for the true meaning of Christmas. 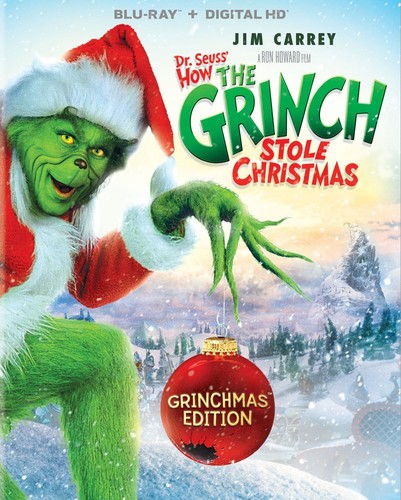 Discover the true meaning of the holiday season with the live action adaptation of the beloved classic, Dr. Seuss’ How the Grinch Stole Christmas. Starring Jim Carrey as the Grinch, director Ron Howard and producer Brian Grazer reimagine one of the most enduring holiday stories of all time. Why is the Grinch (Carrey) such a grouch? No one seems to know, until little Cindy Lou Who (Taylor Momsen) takes matters into her own hands and turns both Whoville and the Grinch’s world upside down, inside out...and funny side up. Filled with dazzling scenery, special effects, makeup and costumes, this is an adventure “that can make your heart grow three sizes – if you’re not laughing too hard!”(Steve Murray, Atlanta Journal-Constitution). 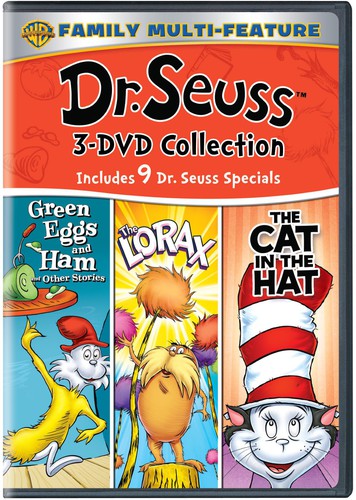 Dr. Seuss 3 DVD Collection: Green Eggs and Ham / The Lorax / The Cat in the Hat

The Dr Seuss triple feature includes The Lorax, Dr Seuss's Green Eggs And Ham And Other Stories and Dr Seuss's The Cat In The Hat. 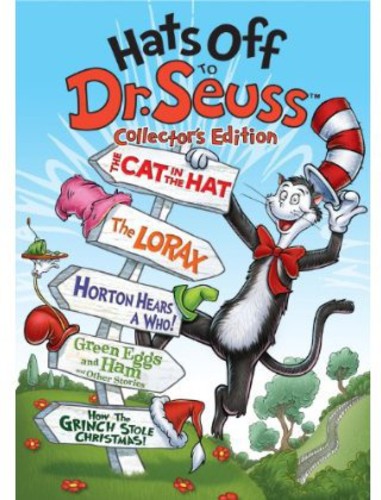 Hats Off To Dr Seuss

2013 will see the continuation of celebrating Dr Seuss with the theme Hats Off to Dr. Seuss, a year long celebration of the 75th Anniversary of THE 500 HATS OF BARTHOLOMEW CUBBINS. Both DVD and Blu-ray will include fan favorites; THE CAT IN THE HAT, GREEN EGGS AND HAM AND OTHER STORIES, THE LORAX, HOW THE GRINCH STOLE CHRISTMAS, and HORTON HEARS A WHO! 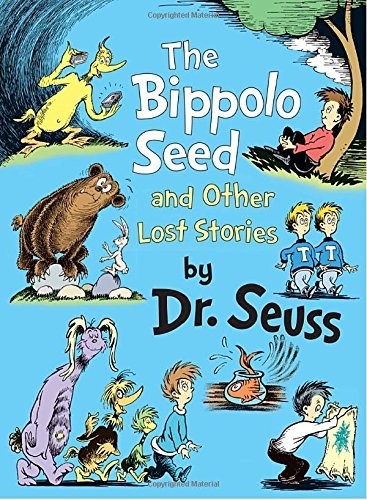 The Bippolo Seed and Other Lost Stories (Dr. Seuss, Cat in the Hat)

What's better than a lost treasure? Seven lost treasures! These rarely seen Dr. Seuss stories were published in magazines in the early 1950s and are finally available in book form. They include "The Bippolo Seed" (in which a scheming feline leads a duck toward a bad decision), "The Rabbit, the Bear, and the Zinniga-Zanniga" (about a rabbit who is saved from a bear by a single eyelash), "Gustav, the Goldfish" (an early rhymed version of the Beginner Book A Fish Out of Water), "Tadd and Todd" (about a twin who is striving to be an individual), "Steak for Supper" (in which fantastic creatures follow a boy home in anticipation of a steak dinner), "The Strange Shirt Spot" (the inspiration for the bathtub-ring scene in The Cat in the Hat Comes Back), and "The Great Henry McBride" (about a boy whose far-flung career fantasies are bested only by those of Dr. Seuss himself). An introduction by Seuss scholar Charles D. Cohen traces the history of the stories, which demonstrate an intentional move toward the writing style we now associate with Dr. Seuss. Cohen also explores the themes that recur in well-known Seuss stories (like the importance of the imagination or the perils of greed). With a color palette enhanced beyond the limitations of the original magazines, this is a collection that no Seuss fan (whether scholar or second grader) will want to miss.

THEODOR SEUSS GEISEL-aka Dr. Seuss-is one of the most beloved children's book authors of all time. From The Cat in the Hat to Oh, the Places You'll Go!, his iconic characters, stories, and art style have been a lasting influence on generations of children and adults. The books he wrote and illustrated under the name Dr. Seuss (and others that he wrote but did not illustrate, including some under the pseudonyms Theo. LeSieg and Rosetta Stone) have been translated into thirty languages. Hundreds of millions of copies have found their way into homes and hearts around the world. Dr. Seuss's long list of awards includes Caldecott Honors for McElligot's Pool, If I Ran the Zoo, and Bartholomew and the Oobleck, the Pulitzer Prize, and eight honorary doctorates. Works based on his original stories have won three Oscars, three Emmys, three Grammys, and a Peabody.

ON SALE
Dr. Seuss
The Bippolo Seed and Other Lost Stories (Dr. Seuss, Cat in the Hat)
Quick View 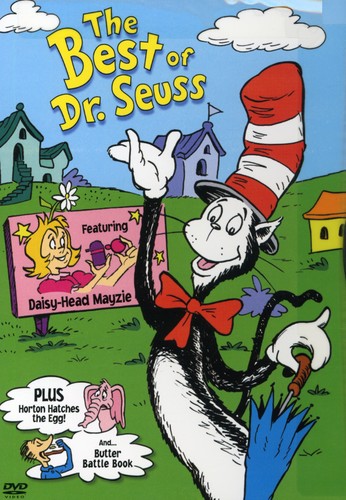 The Best of Dr. Seuss 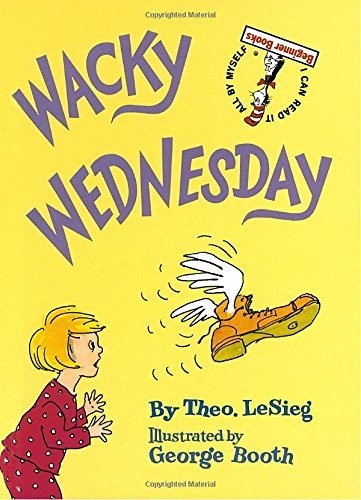 Read and count along with Dr. Seuss and George Booth's classic Beginner Book full of errors.

This is no ordinary day! There's a shoe on the ceiling and bananas in the apple tree, and it only gets wackier.

From a hole in the kitchen table to a green sun in the sky, young readers will love finding each silly mistake.

THEODOR SEUSS GEISEL-aka Dr. Seuss-is one of the most beloved children's book authors of all time.

ON SALE
Dr. Seuss
Wacky Wednesday (Dr. Seuss, Cat in the Hat)
View More Results:
This website uses cookies to personalize content and analyse traffic in order to offer you a better experience.
I accept Learn More
back to top